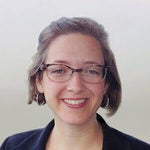 Gabrielle Dalmasso Schneck joined the firm in 2014. She been licensed to practice law in Washington State since 2012. Her practice is exclusively focused on immigration law, covering a broad range of case types and avenues of relief. She works on family cases in front of U.S. Citizenship and Immigration Services field offices around the country and in front of U.S. consulates worldwide, especially Ciudad Juarez. She also represents clients seeking T visas, U visas, Asylum, and Special Immigrant Juvenile Status, as well as naturalization. Her practice includes advocacy related to the immigration consequences of crimes and post-conviction relief. She represents clients who are in removal proceedings and practices in front of the Board of Immigration Appeals. She is admitted to practice in the U.S. District Court for the Western District of Washington.